Chile Carménère: A Winemaker’s Wine of Distinction and Prestige

Craft winemakers are crafting more Chilean wines than ever before!  The popularity of Chilean wines is hardly surprising considering the high quality juice now available from Chile.  In fact, in the last 20 years Chile has become one the world’s best regions for sourcing varietal juice for winemaking, and most of the world’s most popular grapes of French origin, like Merlot, Pinot Noir and Chardonnay, grow exceptionally well in Chile.  More recently Chile has also become famous for its own signature grape now grown almost exclusively in Chile: Carménère. 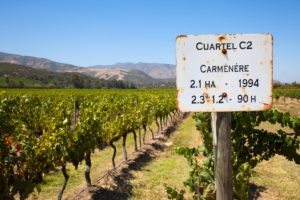 While we often think of Chile as a young and upcoming wine region, the reality is that wine has been produced in Chile for more than four centuries, since the first Spanish settlers brought grape vines with them in the mid-1500s.  On the world stage, Chilean wine first became prominent as far back as the late 19th century due to an unfortunate event that occurred across the Pacific Ocean in Europe. 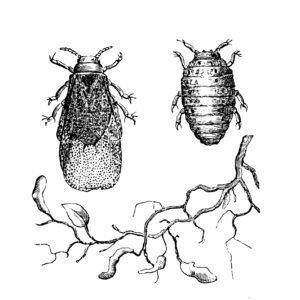 In the late 1800s, European vineyards were devastated when tiny phylloxera insects attacked the roots of European grape vines and destroyed vineyards across Europe. Luckily, before the phylloxera epidemic, Chileans winemakers had brought home and planted cuttings of unaffected French vines, including the Carménère.  As phylloxera spread from Europe throughout the wine world, perhaps because of its geographic isolation, Chile remained one of the only countries unaffected by the pest.

used alongside Cabernet Sauvignon, Merlot, Malbec and Petit Verdot to make the great red Bordeaux blends.  While Carménère was reputed to produce excellent wine, it was not popular with growers because it ripened late and was susceptible to a disease called coulure, a natural condition that can produce extremely low yields. Therefore, when French vineyards were replanted after the phylloxera epidemic, the growers did not replant Carménère.  As a result, hardly any Carmenère can be found in Bordeaux today and scientists believed the grape was almost extinct.

Chilean viticulturalists did not realize their vineyards comprised Carmenère until the early 1990s when, through DNA testing, it was discovered that vineyards long thought to be planted with Merlot, were actually Carmenère. Where

Carmenère struggled in its native region of Bordeaux, perhaps because of its drier and warmer climate, in Chile it thrived and was used to make excellent wines.  It is no surprise that nowadays Carmenère varietal wines are prized by wine critics and collectors alike. 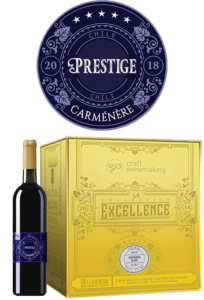 through the RJS Craft Winemaking 2018 Restricted Quantities program. However, as this is a limited release, preordering through your local RJS Craft Winemaking retailer is essential to ensure you can get your hands on a kit or two.  Your RQ2018 “Prestige” Chile Carmenère kit will make a wine that is deep red in colour and has flavours of cherries, blackberries, spice and enhanced with leather and robust tannins.  Enjoy it with all kinds of meat dishes from burgers and steaks to hearty stews.

5 thoughts on “Chile Carménère: A Winemaker’s Wine of Distinction and Prestige”