Does a glass bottle make my wine better?

Have you ever wondered why we most often drink wine from glass bottles? Today we take serving our wine from different shaped wine bottles for granted. But, as much as glass bottles are now the norm, in the entire history of wine, they are a fairly recent development. I did some investigating and discovered that glass does not actually impact the wine’s flavour. The main reason we store wine in glass bottles is simply tradition. 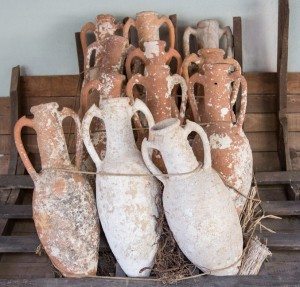 During the time of the ancient Greeks and Romans, wine was stored and transported in large, long containers called amphorae, most often made from ceramic. They varied considerably in size but needless to say, it would certainly have been difficult to pour a glass from such a large and awkward vessel. For centuries, pottery and stoneware jugs were also required for serving the wine.

Glass technology was not developed until the 17th century. Those original glass bottles were only used for wine sold to the upper classes. From 1690 to 1720, the most common shaped wine bottle resembled an onion with a large, bulbous base. Larger bottles were also made and their shapes resembled an inflated balloon or bladder.

The shape of the modern day wine bottle did not evolve until 1730 when winemakers discovered the benefits of storing wine bottles on their sides. It was around this time that winemakers in France started using corks to seal the bottles. Cork became the preferred topper because cork expands in the neck of the bottle for a better seal, protecting the wine from exposure to oxygen. Storing wine on its side ensures the cork remains moist (and expanded). If the cork dries out, it is not effective in keeping the air out of the bottle.

The two most common bottle shapes, still used today, are the Burgundy and Bordeaux bottles. The Burgundy bottle was invented first, sometime in the 19th century. Historians believe the bottle’s unique curved shape came about simply because it was easy for glassmakers to make. Nowadays this bottle is most popular for Chardonnay and Pinot Noir, the two famous wines of Burgundy.

The Bordeaux bottle was invented not long after the Burgundy as a way for the Bordeaux wine region to differentiate their wines from those made further north in Burgundy. Most believe the distinctive high shoulders were created to trap sediment that accumulated in old Bordeaux wines when decanting. Today the Bordeaux bottle is the most popular shape in the world, including with RJS Craft Winemaking customers.

We are seeing traditions slowly change in the wine industry. For example, consumers are now much more accepting of alternative packaging like bag in a box or tetra pack. Even amongst craft winemakers, four-litre Wine Waiter bags are becoming more popular for their convenience. How long will it be before the ubiquitous glass bottle is just a part of wine history, much like the amphorae?

3 thoughts on “Does a glass bottle make my wine better?”