In honour of our The Brew House Kölsch spring release that is available now in stores for a limited time only, RJS Craft Winemaking wanted to provide more information about this delicious German-style beer; alongside some food pairings to enjoy with it this summer! 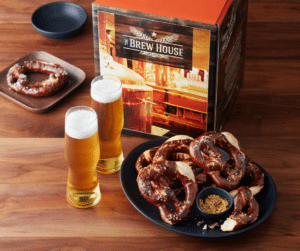 Pronounced Koelsch, Kölsch beer originated centuries ago in Cologne, Germany. Today, about 20 breweries in Cologne and its immediate surroundings brew Kölsch; by law, they are the only German brewers permitted to market their beer as Kölsch. This law does not apply outside of Germany, which has led many craft brewers to make their own interpretations of the Kölsch style, often as a summertime seasonal release.

Kölsch is conditioned like a lager but top-fermented with a yeast strain more readily associated with ale. It is traditionally drunk in groups from a small 200ml glass called a Stange, and as such calls for similarly served foods, such as tapas-style finger food. Shimmering a brilliant gold and soft, Kölsch is a fantastic all-rounder capable of making magic with many of flavours. It has the parch-slaying powers to fend off spice and herb, yet the fruity roundedness and dryness to keep any indulgent textures at bay.

At the traditional Malzmuhle brewhouse in Cologne, the cooks serve Kölsch with hearty and meaty pork dishes, with dumplings and red cabbage. Kölsch’s slight hopiness also lends itself to light fish dishes and seafood too, such as sole with a drizzle of lemon or something meatier like monkfish. Other Kölsch food companions include fried chicken, lightly spiced Jamaican-style, North African tagine dishes and herb-led salads. However, Kölsch is an awesome aperitif beer that slips down superbly with a handful of nuts, cheese and charcuterie.

Craft your next beer with The Brew House, a brand designed exclusively for those with a taste for micro-brewed beers. Make your favourite style of all-grain craft beer in just a few weeks, and enjoy a truly great beer with fresh and pure flavours and aromas.

Great beer requires quality ingredients and a skilled brew master.  That’s where the Brew House comes in.  In our 3-vessel craft brew house, our brew master transforms the best barley, malt and hops into small batches of fresh wort.  We then immediately package this wort, capturing all its delicate aromas and flavours.  No sugar, no concentrate. No extract. Just pure, fresh, unfermented beer!