Over the last fifteen years we’ve often gotten together with our neighbours for dinner.  In the last three years we’ve begun regularly entertaining one another in the form of a progressive dinner. These dinner parties eventually morphed into themed progressive dinners; we’ve had barbeque, beer, Mad Men, Latin American, Greek night, Moroccan and Mardi Gras themes. It was only logical to take our progressive dinner to the next level, by making our very own craft wine for the next get together.

As I suspected, the group jumped at the idea and earlier this month we got together to discuss the theme, menu and wine selection. We chose RJS Craft Winemaking because of their reputation, their award winning wine kits and the passionate winemakers at our local RJS Craft Winemaking Academy store. The afternoon began relatively quietly but soon the discussion became quite lively and excited, who knew they were so passionate about wine? 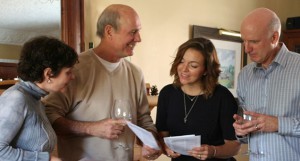 Who knew the discussion around the menu would be so exciting; the group passionately discussed options for our special dinner and with consensus, we decided we all wanted to include cooking with our craft wine as well as pairing it with our finished dishes. Tom and Iona took on hors d’œuvres and appetizers, starting with an antipasto platter of grilled vegetables, cured meats and a variety of olives. Then we’ll continue with an appetizer of mussels and scallops in a white wine broth served with crusty bread. Did I mention that we often go overboard on the food?

We’ll then walk across the street to my house where I’ll serve pistachio crusted white fish (probably halibut but we’ll have to see what looks good at the fish monger) on creamy polenta, grilled asparagus spears drizzled with a pistachio and basil pesto.

The dessert house on this extravagant progressive dinner is right next-door at John and Nancy’s and they’ve decided to poach pears in red wine and serve it with a small quenelle of slightly sweetened ricotta. Poaching pears in red wine softens the fruit and infuses it with the beautiful flavour and colour of the wine. The ricotta is a lovely contrast in texture, which balances beautifully with wine.

We’re all so excited to pick the perfect wines to make for our menu, we’ve already booked our visit at an RJS Craft Winemaking Academy store in our neighbourhood so stay tuned for the next post: Winemaking!